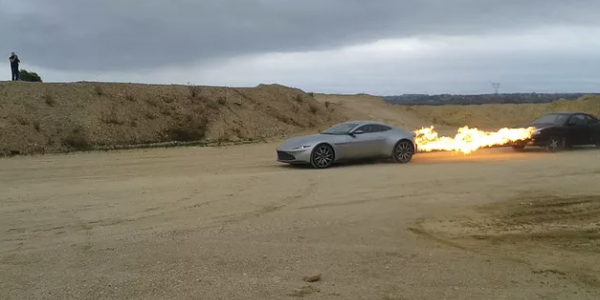 OK, OK, a totally cheesy title to this blog but we've got your attention. And you know exactly what we're going to talk to you about, right?

As a specialist covered car transport company we move all kinds of cars. They all have one thing in common, they are specialist cars which need to travel in style. And no one has more style than James Bond.

We were involved in the specialist car transportation of cars for the filming of Spectre back in 2015. Here are some highlights captured by our driver Pete.

The life of an HGV driver often means rest stops which aren't that glamorous.

Pete's trip to Rome for the filming of Spectre was a little different. Here he is parked up on the bay in Italy, sun shining into the cab. A little different to a day on the M25!

Here are the cars that we moved on the set for the film. There was a fleet of Aston Martin DB10s for the hero, and a row of Jaguar C-X75s for the villians.

As well as night filming for the car chase scene Pete was up close and personal when the DB10 revealed the ace up its sleeve.

But don't worry, no drivers were harmed in the filming of this scene. And Pete heeded the safety warning on the DB10 to the letter.